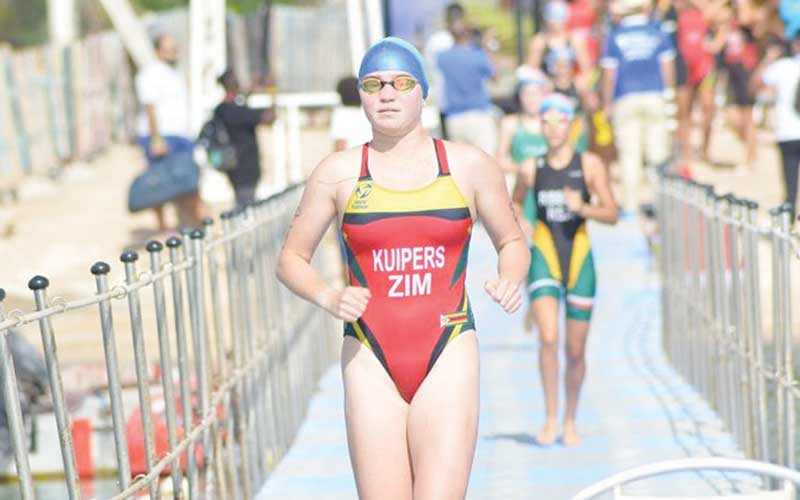 OLYMPIC aspirant Andie Kuipers is the headline name in the 11-member Triathlon Zimbabwe (TZ) team which is set to represent the country at the Africa Triathlon Championships in Morocco later this month.

The championships will run from September 23 to 25 in Agadir, Morocco.

In Morocco, Kuipers will compete in the Under-23 women class.

The Zimbabwe team is made largely of the country’s top juniors, including captain of the team Makanaka Mawere and Brooklyn Tippett, who are set to rub shoulders with the best women juniors from other countries.

George Ascott, who is the other captain, will compete with Matipa Mawere in the Junior men category.

Coach Pamela Fulton believes the team is well prepared for African championships after the final preparations over the weekend.

“This (championships) will be an incredible experience for our athletes, being exposed to different cultures and racing in the sea which will be a first for many of them. Our athletes are very well prepared and very excited to test themselves against the rest of Africa,” Fulton told NewsDay Sport.

The team leaves for Morocco on Sunday evening and is expected to arrive on Tuesday lunch time, and Fulton believes the earlier departure will give the team enough time to rest and familiarise with the environment.

“Our last season ended in April, so these athletes have trained through winter in preparation for this big event, which coincides with the start of our 2022/23 season,” said Fulton.

“We held our National Duathlon championships mid-winter as an opportunity for these athletes to test themselves. During the school holidays, Triathlon Zimbabwe held a training camp to help assist our travelling team in their preparations and to ascertain which areas they still need to work on. The camp was important in bringing our team together and to build team spirit,” she said.