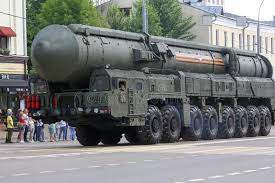 “If American missile systems can nearly reach Moscow from Ukrainian territory, it’s time for Russia to roll out something powerful closer to the American ‘city on a hill’,” said Olga Skabeyeva on the news show on Rossiya-1, the most popular Russian TV channel.

It was a piece of news so obscure and implausible that I missed it when it first surfaced last month. The news was that the Russians are going to put hypersonic nuclear missiles into Nicaragua and terrify the Americans into backing down over Ukraine. Or kill them all if they don’t.

“If American missile systems can nearly reach Moscow from Ukrainian territory, it’s time for Russia to roll out something powerful closer to the American ‘city on a hill’,” said Olga Skabeyeva on the news show on Rossiya-1, the most popular Russian TV channel.

The usual crew of panelists hugged themselves with delight at the idea of American cities being blown away.

“Objects like the city of New York, a good city, but it would be gone. Completely gone with one rocket,” said one.

As a substantial majority of the Russian television audience watches the show, that’s the news ordinary Russians are getting. But if these people really represent the Russian elite’s views of what is possible and necessary, then we are all in trouble. Nuclear war is at hand.

I don’t really think nuclear war is at hand, but there is a lot of loose talk about it in Russia at the moment. So let’s examine the optimistic assumption in the West that some people in the Russian military and diplomatic hierarchies — hopefully quite senior people — have a better grasp of reality than the television pundits.

Are there really Russian generals and senior foreign ministry officials who think that “American missile systems can nearly reach Moscow from the Ukrainian territory”? If you mean American nuclear missiles, then of course not.

The United States has given non-nuclear battlefield missiles to Ukraine, but it has deliberately restricted the ammunition to types that cannot reach any significant distance into Russia. There are no American troops in Ukraine, and no nuclear weapons in Ukrainian hands.

The business about moving American nuclear missiles “closer” to Russia is complete tripe: they are just as lethal from where they are now. Russian generals and diplomats are not stupid: they know that American nuclear weapons systems have been able to reach Russia from the US homeland or any of the world’s oceans since the 1960s.

The Russians sneaked some shorter-range nuclear missiles into Cuba to even things up, but the Americans spotted them, imposed a blockade and threatened to invade Cuba. Moscow pulled its missiles out, and everybody lived grumpily ever after.

Nowadays, both Russia and the US have ample weapons that they can fire at each other from their homelands. “Closer” no longer confers any advantages. Besides, Nicaragua has not said it will host Russian nuclear weapons, or indeed Russian weapons of any sort.

Nicaraguan President Daniel Ortega published a decree last month authorising small numbers of troops from Russia, the US or other Central American countries to deploy to his country for a limited time “for purposes of training, law enforcement or emergency response”.

Ortega was a Marxist in the 1980s. After the Nicaraguan revolution triumphed, he got Soviet help, and US President Ronald Reagan financed a guerilla/terrorist movement in an unsuccessful attempt to bring him down, but that was long ago.

Now, Ortega is just another dictator like Putin. He rigs elections, jails the opposition and treats the state budget as his private income. Nicaragua is broke, so Ortega is happy to take Russian money, but he is probably not stupid enough to let the Russians bring missiles in.

The rational conclusion, therefore, is that this is all just propaganda blather by ignorant Russian TV pundits, but a warning. I predicted that Russia would not invade Ukraine because it would be utterly stupid to do. I am still assuming that Russian leaders are rational, but now I have some doubts.

Dyer is a London-based independent journalist. His new book is titled The Shortest History of War.
Share this article on social