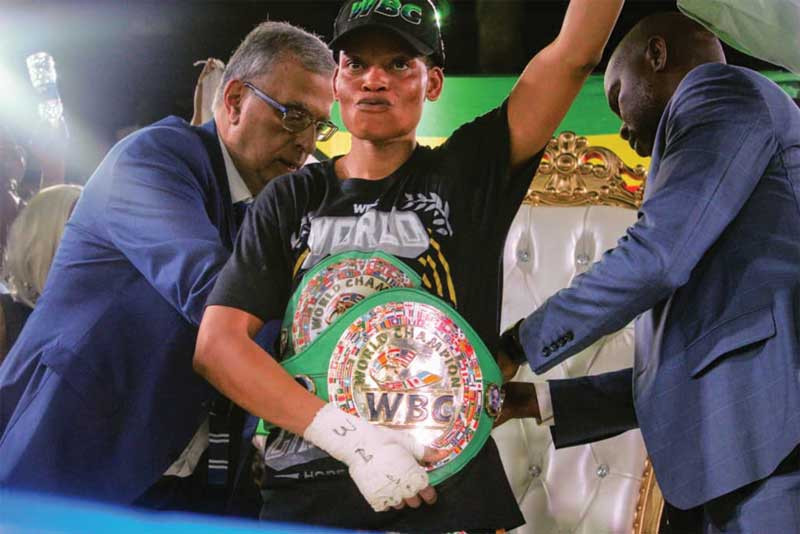 The fight was postponed three times and the WBC agreed to postpone the fight a final time and only went ahead after government availed US$50,000 in support.

Though Munoz was a much experienced boxer with 53 wins, four defeats and two draws under her belt, Chiwandire with just four wins  from her eight career fights, was up for the fight and led on the scorecards of all three after flooring her opponent twice.

From the first round, Chiwandire dominated and gave the cheering capacity crowd hope of a knock-out when she knocked down Munoz in the fourth and fifth rounds.

Take Money, however, continued to dominate and it was no surprise when her hand was raised by the referee in the end. By the time the winner was announced, the audience was already in celebration as it was clear that Chiwandire had taken the fight.

The fight could make Take Money US$40 000 richer, with the winner guaranteed US$20 000.  Deputy Sports Minister Tino Machakaire Machakaire, in his own capacity pledged US$10 000 while businessman Pedzisayi “Scott” Sakupwanya pledged a similar amount.

This win means Chiwandire will now challenge for the gold belt next year to face either Mariana Juarez or Yamileth Mercado who are set to fight for the WBC Super bantamweight world championship in Mexico on November 29.

Chiwandire basked in glory after the win and vowed to continue working hard to prepares for the new challenge.

"As for me I'm now getting more experience because I'm fighting experienced boxers. So, thank you Zimbabwe. I feel great because I'm the only female boxer in Africa holding a (global) title and I'm raising the country's flag high. I'm not going to stop here but continue raising the flag higher," said Chiwandire.