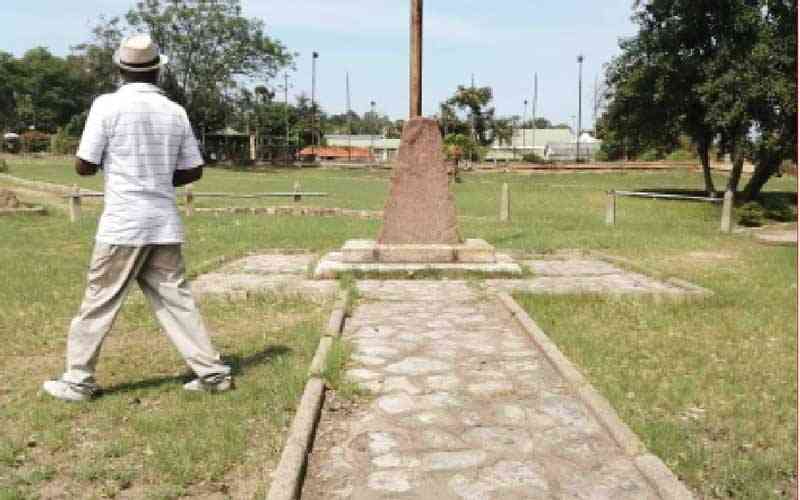 LAST week there was an interesting article Concerning the deteriorating condition of Bulawayo's Post Office Gardens whose continued survival is under spotlight  as this leisure and rest centre is gradually headed into oblivion.

This particular article which Yours Truly considers it  to be suitable for an  award-winning story appeared in one of the country's weekly newspapers  where the writer was extolling yesteryear virtues of this place that is situated  adjacent to the main post office in Bulawayo.

To the uninitiated, the Post Office Gardens are situated along Joshua Mqabuko Nyongolo Nkomo Street and 8th Avenue, this used to be an appropriate rendezvous for people from all walks of life even from other provinces.

This particular garden located in the heart of the city centre used to be a hive of activity due to uniqueness of its Victorian structure whose edifice is made complete by corrosive free plaques with names of Rhodesian servicemen who died while on combat duty during the First and Second world wars.

The place used to be ideal for romantic dates, marriage proposals, and business deals, pick-up and drop-off points as it was the most convenient sought-after venue within the city centre.

However, the place is now a pale shadow of its former self, hence it is perennially under padlock with some locals jokingly suggesting that it might never be opened as the keys for opening were lost or deliberately thrown away, hence its current status.

Yours Truly will keep an eye on latest developments as the structure and its environs have some sentimental value worth writing about.

There is also a more or less similar place in the coal-mining town of Hwange which is somehow interrelated with yesteryear memories of the world’s two biggest wars.

The place dubbed “Hwange Unity Square” is located south east of the popular Colliery Club with the latter having its own iconic status whose antiquity is worth mentioning at some later stage in this column.

This obelisk  structure is situated in the midst of lush scenery which needs a few touch ups in terms of maintanance even though local groundsmen are doing their best to maintain it to its former glory, which used to be an ideal place for weekend and leisure outings.

On the huge obelisk granite structure is carved 1914-18 as well as 1939-45 highlighting the two world wars where the then Rhodesian forces were part of the British Commonwealth army.

Those in the know of how this magnificent structure came into being have reported that it was during the Rhodes and Founders holidays where veterans as well as surviving spouses converged to pay homage to their departed ones, who lost their lives during these two great wars.

Rhodes and Founders holidays were held during first or second Monday of each July, which in the process indirectly created an annual four-day holiday.

However, Yours Truly is open to more information concerning this edifice on whether the above information is correct for historical purposes as this place was once a favourite with both local and foreign tourists.

It seems no one knows how the name Hwange Unity Square came into being and Yours Truly even hazards by trying to link the structure’s similarity with that of Africa Unity Square, which is located in Harare.

Hwange Unity Square is just a stone throw away from the only 'surviving' bowling club, which might also be headed into oblivion if necessary precautions are not administered.

However, it is rather not late to revive such a structure and kudos to the-powers-that-be who despite the odds are trying to bring some semblance to their former glory.

If one happens to pass through Hwange town, this is one (Hwange Unity Square) of the places to visit even though it is rather beyond its former glory, but in dire need of some form of redemption.

This calls for collective effort from all and sundry and Yours Truly has started the ball rolling and now the onus is also on you my dear reader of this column.

Is it real or a myth that when the Colliery Club in Hwange sneezes other recreational clubs automatically catch the cold?

Those in Hwange Town please assist on this issue.

Talking of this particular club, Yours Truly recently temporarily took the role of a peacekeeper when a certain wife who had accompanied her husband, a pool (snooker) player fanatic. He was paired with a certain lady and the match resumed. She was not on the loop on how the game is played especially on the posture side.

And the rest is history.

Till we meet again in the next column.