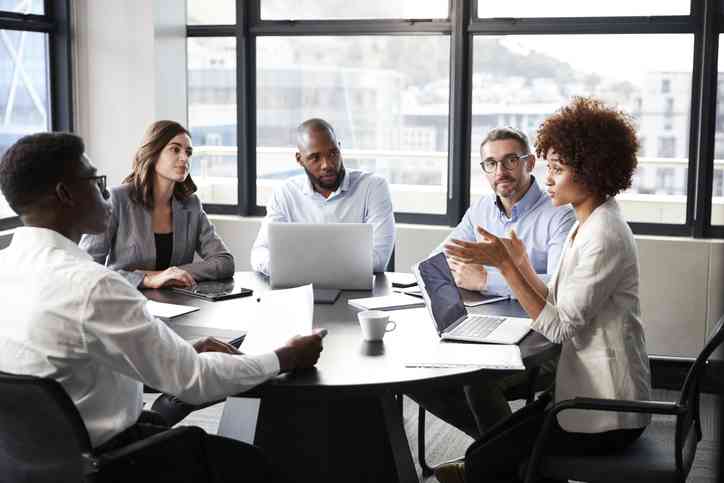 A joke is told of a woman who got so stressed that she woke up in the morning, took her baby to her workplace and proceeded to the baby’s creche and it was only when she got to baby’s creche that she realised that she had left the baby at the wrong place.

I thought about this joke recently and imagined that maybe this woman missed an environment with kids only, a kindergarten school of some kind, where there is a jocund and child like atmosphere and the energy is pure, promoting joy, happiness and playful performance.  Would you not like to work in a place like that?

Would it not be heavenly to have a workplace like that? As kids in the village, we created a lot of playful ‘work’ in that kind of atmosphere where the spirit of friendship ruled. We got together to ‘work,’ creating art and craft in that kind of spirit. We built homes and fought just a bit.

There is something about childlikeness that the workplace needs.

Maybe Jesus was referring to that when he spoke about the kingdom of heaven being for such as these. For such as the as the kids who are yet to lose consciousness and so are free, forgiving, curious and creative. They ask difficult questions of understanding. A kid can make an adult uncomfortable by asking them why their head is big.

That is their preserve because adults get to a point where certain things will not be questioned. Creative and people orientated companies value curiosity thoroughly because they know innovation comes from it. What seems ordinary to many will raise questions in a child’s mind and they will not have any inhibitors asking those questions, sometimes causing discomfort to adults.

I recall my daughter coming to me crying because a neighbour friend had hit her. I just casually said to her that I would kill him and I was to learn a listening lesson the following day, free of charge. She said to me when I had long forgotten about the whole issue that kids were not supposed to die because they were young.

Now I was totally unaware of the angle this story wanted to take. She said that because kids were young, they needed to be given a chance to grow up and have their own kids and I kept on agreeing with every statement she made. Unbeknown to me, my daughter had been disturbed by my casual threat to kill Eli, her friend, the previous day. When she realised that I agreed with her, she looked at me with totally surprise and said, ‘But you said you will kill Eli.’ I just had to reverse my threat and promise her that I would never do that. Some companies spend a lot of money on training their employees on listening. You get such courses as listening skills and employees would be taught such things as the need for eye contact, for example when listening.

My daughter suddenly became a listening skills trainer for me because now I listen when she talks to me, in case I am caught napping again. Imagine a workplace where you have people really listening to you when you spoke to them and stopping whatever they were doing to give you full attention because they take you seriously and consider that what you say is important every time. In the workplace we have to listen for a number of reasons.

On the one hand, work messages have to be heard and understood fully so that execution is based on accurate understanding for quality and on the other hand human beings by their nature have a desire to be listened to and for that connection listening gives. Certain hormones of happiness such as dopamine and oxytocin are secreted because of such things as feeling good because you are being taken seriously. Kids will teach you to listen and they listen attentively if you have something interesting to tell them.

Grannies in the village became their favourite people because they got kids listening with their interesting folktales. The kids’ eardrums got excited because they got beautiful messages knocking on their eardrums.  Maybe managers have one or two lessons to learn from this. What is it that makes people listen attentively? You might be thinking right now as you read that in the workplace there are no children.

Well, we are postulating that that is the problem.

The workplace might not have children but it does need childlikeness for it to be heavenly. If heaven needs such as kids, the workplace also does. Who doesn’t want a heavenly atmosphere in their workplace? It is interesting that we desire certain results in many engagements but unconsciously work against them.

One gets such reminders as ‘let’s be serious, we are all adults here…’ Yes, we are adults but by emphasising rigid seriousness, we move away from open thinking and creativity and go in the direction of rigidity. Simon Sinek puts it aptly that it is the limbic brain that makes decisions and not the organised part of the brain that thinks numbers and all. This limbic brain and its function have its role of emotional connection being associated with not being serious.

Many have been reminded not to be too emotionally but reason rationally because they are not children. Interestingly this is the part Sinek says makes very important decisions such as buying certain products, voting for certain political parties and even deciding to join a certain company based on the appeal of their vision and mission.

What most people mistake childlikeness for is childishness, where excitement gets away with murder and productivity suffers.

They lose the important element of needing to establish an open, creche like atmosphere our woman who took her child to her workplace ‘unconsciously’ got and implemented. She needed to be with the kids. Her heart yearned for their embrace and genuine kisses and it directed her there. We need to loosen up in the workplace and laugh a lot like kids. We should laugh enough to activate creativity. When we laugh, something happens inside us bio chemically and we need that in the workplace and we all seem to really enjoy it when kids laugh their lungs out. Why? Because we want what they have. The workplace, just like heaven is for such as the children.