Letter to my people: Don’t read much into the handshake 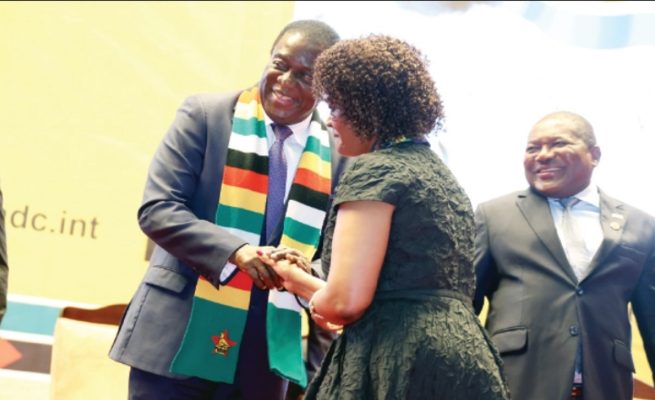 Well, it is true that I was in Kinshasa to receive an award from Sadc on behalf of Baba for his role as the founding father of this country.

BY DOCTOR STOP IT

Many of you have been sending me messages to check if a picture of me shaking hands with Ngwena that has gone viral is authentic.

Kkk, I understand your scepticism!

The picture was shared by an excited Joji on Twitter and very few of you trust him as he is a known student of Joseph Goebbels.

It could have been photoshoped!

Well, it is true that I was in Kinshasa to receive an award from Sadc on behalf of Baba for his role as the founding father of this country.

They say a prophet is not without honour except in his hometown, and that is true of Baba.

Nearly five years after they humiliated Gushungo by putting him under house arrest, Ngwena and his gang have done nothing to honour him for the three decades he spent running this country.

The only thing they think about is exhuming his remains so that they can retrieve their imagined tsvimbos. Munopengaa!

Anyway, back to Kinshasa. Most of you observed that I looked disinterested in that picture with Ngwena.

I was just going through the motions. I will never forgive the Lacoste gang for what they did to Baba, not in this lifetime.

The Sadc award was confirmation that Ngwena will never be in Baba’s league and he must learn to live with that.

So on Saturday, Ngwena’s cheerleaders will attempt to match Baba’s million-man marches by holding a solidarity rally for their beleaguered leader.

To us the politically woke, the rallies are confirmation that someone is feeling insecure in the cockpit.

Baba’s million-man marches were organised to send messages to the likes of Mujuru and Ngwena that there was no vacancy at State House and they were very effective because those two feared Gushungo.

Ngwena had to wait until age and cancer had taken their toll on Baba to use a whole army to seize power.

As they do their solidarity rally, please watch out for the signs!

I am getting credible information that Generari is turning the heat on his erstwhile coupster. It will not end well!

Speaking of fights in the cockpit, I gather young Justice Wadyajena, who was arrested for allegedly pilfering US$5 million from Cottco, could be a victim of serious fights in the Lacoste camp.

Wadyajena is a known business front for some powerful forces and his arrest was not anticipated by many.

As if the arrest and humiliation of spending a night in remand prison was not enough, the excitable MP was stopped in his tracks by our alert security agents while trying to smuggle two luxury cars into South Africa.

The Horrid, which often chooses to see no evil, hear no evil when members of Lacoste break the law, was first with the Wadyajena story.

As it found its voice, the propaganda rag screamed: “Busted: Border authorities have intercepted two state-of-the-art vehicles belonging to troubled law maker Justice Mayor Wadyajena on suspicion they were being  taken to South Africa.”

Kkk, what did they say about removing criminals around the president?

After Zanu PF’s humiliation in the March 26 by elections, the shaken Lacoste strategists have been cracking their heads seeking ways to stop the CCC juggernaut ahead of 2023.

They even resorted to recruiting the professor to do their bidding from exile.

The nutty one has been screaming himself hoarse calling for CCC to be banned from taking part in the elections because he says the party has no structures.

Zanu PF came out in the open to own the absurd structures song after the forgotten Pupurai Togarepi threatened that CCC would not be allowed to contest the polls if it does not have structures.

Poor Togarepi has been trying to get Wamba out of the presidential race since 2018 after sponsoring a resolution at a Zanu PF conference that would have seen the constitution being amended to raise the age limit for presidential candidates to 50.

As it became apparent that the hare-brained strategies won’t work, the trusted Chigumba jumped into the fray.

Chigumba’s ZEC on Friday decided that it was raising fees for presidential candidates to US$20 000.

It’s clear this is an attempt to try and elbow out Wamba since Zanu PF decided to give money that belongs to his party to Mwonzora.

The vain hope is that Wamba will be crippled by the fees and fail to mount a serious challenge to Zanu PF, which is obviously banking on Queen Bee’s deep pockets.

I can tell you now that their strategy is bound to fail as well.

Zimbabweans are tired of being led by a corrupt and clueless gang that is only obsessed with accumulating wealth.

The time of reckoning is coming fast.

DOCTOR STOP IT Generari
Share this article on social