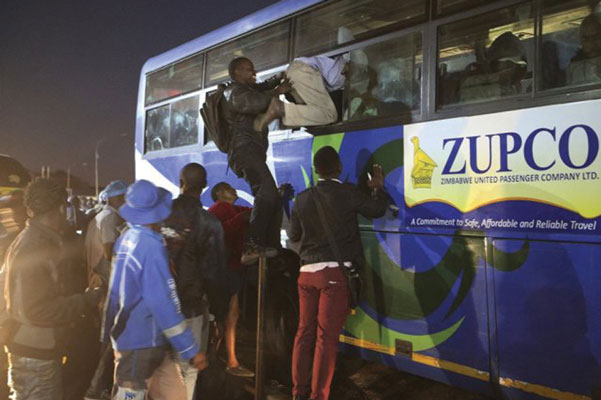 The government’s stance on the Zimbabwe Passenger Company (Zupco) monopoly in the face of failure by the state-owned company to provide adequate transport for urban dwellers raises real questions about the government’s irrational ban on private operators.

State resources were used to import hundreds of buses for the perennially struggling Zupco and Zimbabweans were promised that the transport problems were being addressed once and for all.

The procurement of some of the buses was mired in controversy as stories emerged that a local businessman, who is also a known financier for the ruling Zanu PF, was importing the buses and selling them to Zupco at inflated prices.

Zupco also came up with a franchising system where private transport operators were forced to hire out their vehicles to the parastatal.

The arrangement has, however, not been smooth because of low rates offered by Zupco and payments that are never made on time.

Private transporters have been withdrawing their buses and this has worsened the transport crisis in urban areas, which became more pronounced in cities such as Harare in the previous week.

The situation has been made worse by police operations targeting private motorists that offer transport to stranded commuters.

What the transport crisis has proved beyond doubt is that the government has failed in its attempt to revive Zupco, which has over the years been weighed down by rampant corruption and mismanagement.

The authorities must seriously reconsider the ban on private transport operators in order to end the plight of commuters, who have to endure several hours in queues, leading to serious loss of production time.

Most Zimbabweans are self-employed and the mobility problems put a serious strain in citizens’ livelihoods.

For once the government needs to put the interests of citizens ahead of those of individuals and businesspeople that are clearly benefiting from the Zupco monopoly.

There is also an urgent need for accountability around the procurement of the Zupco buses.

How many buses have been bought so far by the government and where were they deployed?

Local Government minister July Moyo, who is in charge of Zupco, has been conspicuous by his silence around the transport crisis and he needs to find his voice.

Commuters want to know what the government is planning to do to end their suffering. The only viable solution is to end the Zupco monopoly.