The strange tale of China's loans to Zimbabwe 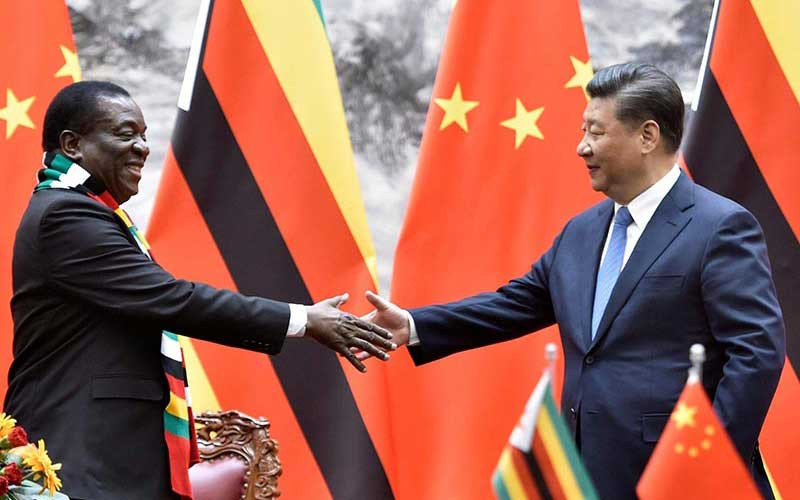 THERE is a popular English saying that goes like “truth, is stranger than fiction.”

The idiom is used to emphasise that sometimes, real events are stranger than imaginary ones.

This was on full display last week on Wednesday, when Finance minister Mthuli Ncube made a shocking revelation during a Parliamentary session. He revealed that on October 13, 2006, the government offered 26 million ounces of platinum worth nearly US$28,16 billion to secure a US$200 million farming mechanisation input loan from China.

That means, the Zimbabwean government offered collateral that is nearly 140 times the actual loan based on international spot prices at the time.

Why this is concerning is that from the US$200 million loan, to date, US$172 million is yet to be paid, meaning, if the Chinese government wanted to, it has a right to claim the platinum.

“The reason why they (government) continues doing that, is because it is not held accountable for its actions. Therefore, it creates impunity and the spirit of recidivism. It's almost demonic. It keeps coming back again and again until it is exorcised. And the tools for exorcising that again are people power. We need to mobilise people to demand accountability and Parliament must play its part.”

Leading up to the loan, the Zimbabwean government was under serious targeted sanctions following the violent land reform programme of 2001 that saw white minority farmers forcibly kicked off their land to give way to black ones.

However, most of those black farmers were not actually farmers who knew what they were doing. No. Instead, the new farmers were business leaders, politicians and government officials linked to the ruling Zanu PF party.

This is why most farmers were not given title deeds to these farms.

Thus, land as collateral for bank loans, was taken off the table leading to lending contracting in the agricultural sector and related sectors.

Resultantly, the Zimbabwean dollar started depreciating as economic activity contracted, quickening the inflation rate that later led to the local currency being abandoned in February 2009 only to be brought 10 years later in June 2019.

To try and save the situation, the Zimbabwe government started looking to the east, desperate for money with this platinum deal being one of many with China.

“This House was told that the PPP [private public partnerships] was virtually done. That was nearly a year ago and since then, we have heard nothing. No one has asked the question but the point is we do not know what is happening on investment, whether it is PPPs, grants or loans,” Harare North MP Alan Norman Markham said, following Ncube’s presentation on Chinese loans.

“Hence my previous question on the Chinese, no one in this House knew the amount of investment from China and the value. I implore the minister to let us know what is happening while it is happening.”

Ncube revealed that, in total, the Zimbabwean government owes China about US$2,6 billion. The Chinese loans were mainly for the mining, manufacturing, infrastructure, agriculture, and health sectors.

Thus, without any other external financial support owing to targeted sanctions, the Zimbabwean government could have made more resource backed loans (RBLs) with its Chinese counterpart.

This leaves the southern African nation at the mercy of China, which has long been accused of the “China Debt Trap,“ that Western countries have accused the Asian giant of enforcing.

The trap entails the Chinese government lending money to poor developing African nations and asking very little on their ability to repay in exchange for natural resources worth more than the loan.

According to the Centre of Natural Resource Governance, Chinese mining firms linked to the Asian country’s government are already heavily fingered in Zimbabwe’s illegal gold and gem mineral trading.

A bilateral investment agreement between China and Zimbabwe signed on May 21, 1996, that came into force on March 1, 1998 makes the country beholden to the Asian giant.

This is because based on the agreement, as lending is a form of investment, while the government can terminate such deals it’s difficult due to several stringent measures attached with such actions attracting very high penalties and fees.

A June 2020 working paper on Chinese debt from the SAIS China Africa Research Initiative, a division on Chinese and Africa relations, at the Johns Hopkins University School of Advanced International Studies in the United States, reports that China rarely claims collateral from defaulting countries.

What it does do, however, is continually restructure loans so that the country continues to be beholden to it and with the 1996 bilateral agreement with Zimbabwe, China finds other ways to get its debt serviced.

“Zimbabwe is unusual compared with the other cases that follow. Because of its high level of arrears in its Paris Club and multilateral loans, Zimbabwe has not been eligible for most kinds of IMF (International Monetary Fund) lending. However, it appears that each time Zimbabwe went into default on its government loans, China Eximbank would halt disbursements on projects that were in the implementation phase,” SAIS said, in the report.

“To secure new loans, China Eximbank required Zimbabwe to make arrangements to pay or reschedule its arrears, something we saw reflected in the Indonesia case, as well. For example, in 2005, the two governments, ‘signed a framework agreement according to which 25% of foreign exchange revenue from Zimbabwe’s exports to China would be used to service Chinese loans,’ which allowed new financing to take place.”

“Unlike the Paris Club, China does not regularly publish its debt cancellation statistics, and there is no official breakdown of the numbers by year or country. A widely circulated myth is that China had cancelled US$ 10 billion in African debt by 2005. This is not the case,” SAIS said, in its report.

Based on the paper, between 2000 and 2018, SAIS estimated that Chinese lenders signed US$148 billion in loan commitments to African sovereign borrowers and their State-owned enterprises, a move ensuring a continued line of income through debt repayments or servicing conditions.

“Our data records more than 1 000 Chinese loan commitments in 49 African countries since 2000. Between 2000 and 2019, Chinese lenders restructured or refinanced at least 26 individual African loans. We found that China has restructured or refinanced approximately US$15 billion of debt in Africa between 2000 and 2019,” SAIS said.

“Refinancing is rare, limited to one transaction in Angola by China Development Bank. Unlike the Paris Club, Chinese lenders have tended to treat restructuring or cancellation loan-by-loan, not on the basis of the entire debt portfolio in that country. This parallels an earlier emphasis on “development sustainability” (looking at the future contribution of the project) rather than “debt sustainability” (looking at the current state of the economy) as the basis of project lending decisions.”

A day after Ncube made the revelations, Chinese ambassador to Zimbabwe, Guo Shaochun, dismissed the China Debt Trap as a Western lie to deflect responsibility and blame.

He made the remarks at the inaugural Zimbabwe Investment Forum, held by our sister paper, Zimbabwe Independent last Thursday.

This will mean Zimbabwe will still need to continue entering into RBL backed loans with lenders such as China.

Zimcodd said as a result of failure to honour financial obligations when they fall due, Zimbabwe can no longer easily access concessionary borrowing from international financial institutions like the World Bank and African Development Bank.

“The authorities have now resorted to RBLs to augment its domestic sources of finance. However, these RBLs are costly as payment default may lead to appropriation of a country’s assets, one high-profile example being Sri Lanka which had to hand over a strategic port to Beijing in 2017 after it could not pay off its debt to Chinese companies,” Zimcodd said.

Zimcodd said also, an asset collateralising an RBL is mortgaged way below its market value.

“For instance, at the current global prices of US$900 per ounce of platinum, the 26 million ounces used as collateral are equivalent to a whopping US$23,4 billion, an amount that is adequate to repay all of Zimbabwe’s external debts independently estimated at US$22 billion,” Zimcodd said.

Zimcodd added that beneficiaries of the farm mechanisation scheme had still not repaid the loans.

“The then Reserve Bank of Zimbabwe (RBZ) governor Gideon Gono is on record saying that it was not a loan scheme and beneficiaries were not required to pay for the equipment they received,” Zimcodd said.

“In other words these were freebies for the privileged yet 60% of the population is wallowing in abject poverty.”

The effect on poverty is that high debt levels forces the government to focus on debt repayments, affecting Treasury’s ability to allocate funds to address growing social needs.

Transparency International Zimbabwe executive director Tafadzwa Chikumbu said Parliament had made a lot of recommendations on debt that needed to be followed up.

“So, the first way forward is for Parliament to come up with a clear roadmap in terms of following up on their recommendations, not just on this particular one, but also on other issues that come through to Parliament,” he said, during the Zimcodd Twitter space.

“Because, what I’ve noted over the years is that element of making recommendations and then once they make recommendations, they forget about them and open fresh ones. On this particular one, it's an issue that has been with Parliament for some years, starting with the debt assumption that was discussed”

He later continued: “Thereafter, it died a natural death and of course this is also another issue which is emerging related to the same conversation they had in Parliament.

So there needs to be a clear follow up for their recommendations and of course I do agree with the need for a broad national strategy.”