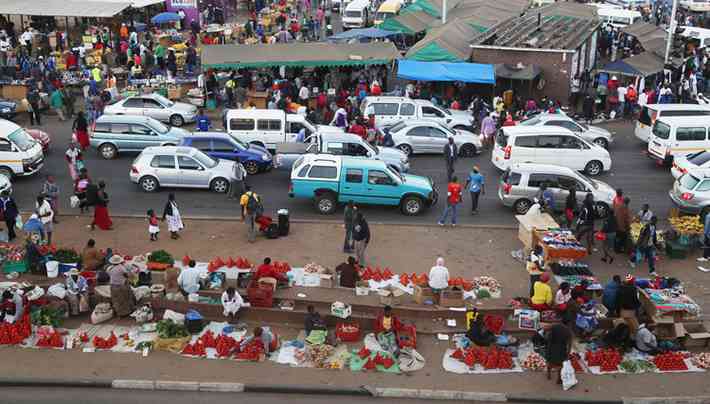 Policy missteps and inconsistency has turned the Zimbabwean economy on its head against the formal sector, posing a threat to business continuity, domestic resource mobilisation and formal employment. In the last two months, the government has ceased payments to government contractors and suppliers in order to arrest the depreciation of the Zimbabwean dollar and reduce inflation. On its part, the Reserve Bank of Zimbabwe (RBZ) has been aggressively mopping up excess money created by local banks to suppress broad money expansion.

This has resulted in a liquidity crunch in the formal market with shortage of electronic money, physical cash, and foreign currency at the same time. Consumer demand in the formal sector has also dipped as a response to the interventions. The positive impact is that the free-market exchange rate has stabilised, and prices are going down. The ultimate objective is to force the convergence of the manipulated formal exchange rate and the free-market exchange rate. However, the questions remain on how long the government can survive without paying its suppliers, especially as the nation heads towards the harmonised elections that should take place before August 2023. The government survives on providing subsidies to various sectors of the economy to appeal to the electorate, hence the propensity to fund these subsidies via money printing remains high.

The formal sector and the informal sector have become two distinct economies in Zimbabwe with the former vulnerable to inconsistent fiscal and monetary policies while the latter has no intended regard for both. The informal sector contribution to gross domestic product (GDP) is estimated to be below 50% according to national statistics.

According to the World Bank, Zimbabwe’s economy grew by 5,8% to US$19,2 billion in 2021 after contracting by 6,1% in 2019 and 6,2% in 2020. The existence of the dual economy makes it difficult for the government to control the economy through fiscal or monetary policies as the informal sector is predominantly cash based and fully dollarised.

It is estimated that US$2,5 billion is circulating outside the formal banking system in Zimbabwe with households, businesses and foreign investors preferring to store their hard-earned foreign currency close to their pockets. Sustained policy missteps continue to chase away foreign currency from the formal economy. Estimates show that over 65% of the Zimbabwean economy is now informal, while 85-90% of Zimbabweans are engaged in informal economic activities at a personal, household or enterprise level. The 2022 Labour Force Survey published by Zimstat points that 3,3 million people are employed locally, with over 2,8 million deriving their living from the informal sector as opposed to 495 000 in formal employment. The informal sector is wired into the local and regional supply chains, thus creating a trading platform where millions of dollars exchange hands daily.

The current export retention scheme allows most exporters to retain 60% of the export proceeds and surrender 40% to the central bank. If the 60% is not utilised within four months, the central bank will confiscate another 25% to take the total surrender requirement to 65%. On local foreign currency sales, the bank retains 20% of all sales deposited with local banks. Ordinarily, these measures would not be a challenge if the foreign exchange rate was market determined. With key exporters paying taxes and electricity in foreign currency, foreign exchange regulations are a punitive tax to business viability. Considering the above, most exporters are now calling for the review of the retention threshold to 80%.

The complex tax regime, multiple tax heads to various government entities and frequent renewals are helping to destroy the formal economy. The tax complexity has to do with a limited automation (excessive paperwork), archaic laws, payment in different currencies, need to travel to Harare or major cities to file tax returns and the involvement of numerous government agencies. For businesses that deposit their sales proceeds in local Foreign Currency Accounts (FCA), the central bank converts 20% of the deposit to local currency and an Intermediated Money Transfer Tax (IMTT)  of 4% applies to payments made from that FCA account.

Due to the above, large businesses are finding ways to transact in cash and not banking all sales proceeds. There is an urgent need to remove barriers to formalisation through simplifying the tax registration process and providing incentives to fiscalisation by making the cost of fiscalisation tax deductible or partnering commercial banks to spread the cost of fiscalisation over time. This means that tax payments and filing tax returns should be done efficiently online without physically visiting the tax agency. For the few tax compliant businesses, the tax agency must process tax rebates efficiently and give holidays where it is necessary.

Zimbabwe’s informal sector bears a mark of economic resilience, however high levels of informalisation are also unsustainable for any country as it leads to limited tax mobilisation on the part of treasury which leads to poor public service delivery (poor road infrastructure, power cuts, lack of basic healthcare, poor service delivery in education, housing, water, and other public amenities) and limited capacity to repay public debt (increase in arrears).  While the informal sector is growing, it cannot be excluded from consuming public services despite not contributing to tax payments. Additionally, high levels of informalisation lead to a limited credit market and savings growth in the economy, limited growth in the financial and insurance sector (decline in banking sector lending and geographical presence). Informalisation also nurtures and aids corruption, and criminal activities in the economy. Thus, levels of information must be managed to below 40% of the economy to ensure sustainable economic growth.

To ensure currency stability, the central bank must end all quasi-fiscal operations which will enable it to sustainably freeze money printing and institute a market determined exchange rate through allowing commercial banks to be matchmakers. Commercial banks should be allowed to adjust exchange rates according to demand and supply mechanisms as is the case in most countries. On constitutionalism, the central bank must not be allowed to contract any foreign debt without parliamentary approval as this brings conflict of interest on how to settle that debt while allowing the exchange rate to be market determined. However, sustained stability can only be guaranteed by giving the central bank independence from political influence in terms of money printing. History has proved that the government has no hesitation to print money to fund its expenditure and meet political objectives at the expense of the economy or the taxpayer (citizens and business).

Zimbabwe has not had a consistent currency or consistent foreign exchange policy for several decades. The central bank’s quasi-fiscal operations and deficit financing of the fiscus have necessitated astronomic levels of money printing at whatever cost to the nation. The economy collapsed in 1999-2000, 2006-2008 and 2019-2020 due to hyperinflation. At the core of the problem is the government’s desire to control the central bank monetary policy and print money whenever tax revenues fall short of targeted government expenditure.

Between 2015 and 2022, the country promulgated hundreds of statutory instruments (temporary measures) aligned to monetary policy and produced a plethora of exchange control regulations or statements. Some statutory instruments contradicted each other while some just fizzled out before parliamentary ratification. Stable and consistent monetary policy is a fundamental piece to the economic stability puzzle, without which the country will not develop regardless of how colourful economic blueprints can be. The preference to trade in hard currency and in cash points to lack of trust in the government’s unsound policies over the years.

The collapse of the formal sector needs to be addressed via deliberate policy alignment between the central bank, treasury and various government agencies that play a part in levying and regulating the market. It is key to point out that millions of employees that derive a living from the informal sector lack job and social security, suffer from income inconsistency, lack of health insurance, depressed savings and live from hand to mouth. All these conditions are closely associated with poverty. The government cannot institute policies that destroy formal employment, inflame skills flight, promote informality such as tuck-shop retailing, street trade in legal or illegal goods, hard dollarisation, decline in banking sector lending and choke the credit market while expecting the economy to grow. Government policy should simply serve to create a conducive business environment and regulate market failure in the interest of curbing unfair or illegal business practice. Destruction of the formal sector cannot yield sustainable economic growth and will take years to undo.

Americans clinging to cash
The reality is that investing in the stock market is worrisome for many Americans right now.
Opinion
By Kerry Hannon
Feb. 3, 2023

A bad case of cultural lag
Babiš denied any involvement in that deceit, but his campaign tried to drum up fear of war between Nato and Russia and stressed that he was not aligned with the “reckless” West.
Opinion
By Gwynne Dyer
Feb. 3, 2023

World View: How to avoid a war with China
This is fostering a fatalistic belief that a war between China and America is inevitable not only in the US, but to a lesser extent also in China.
Opinion
By Gwynne Dyer
Feb. 3, 2023

Lexus ES 300h SE hits the mark
The new ES differentiates itself from its competitors with features like the three-dimensional "spindle" grille on the front, katana-slash headlights, and an arched roofline.
Opinion
By Andrew Muzamhindo
Feb. 3, 2023