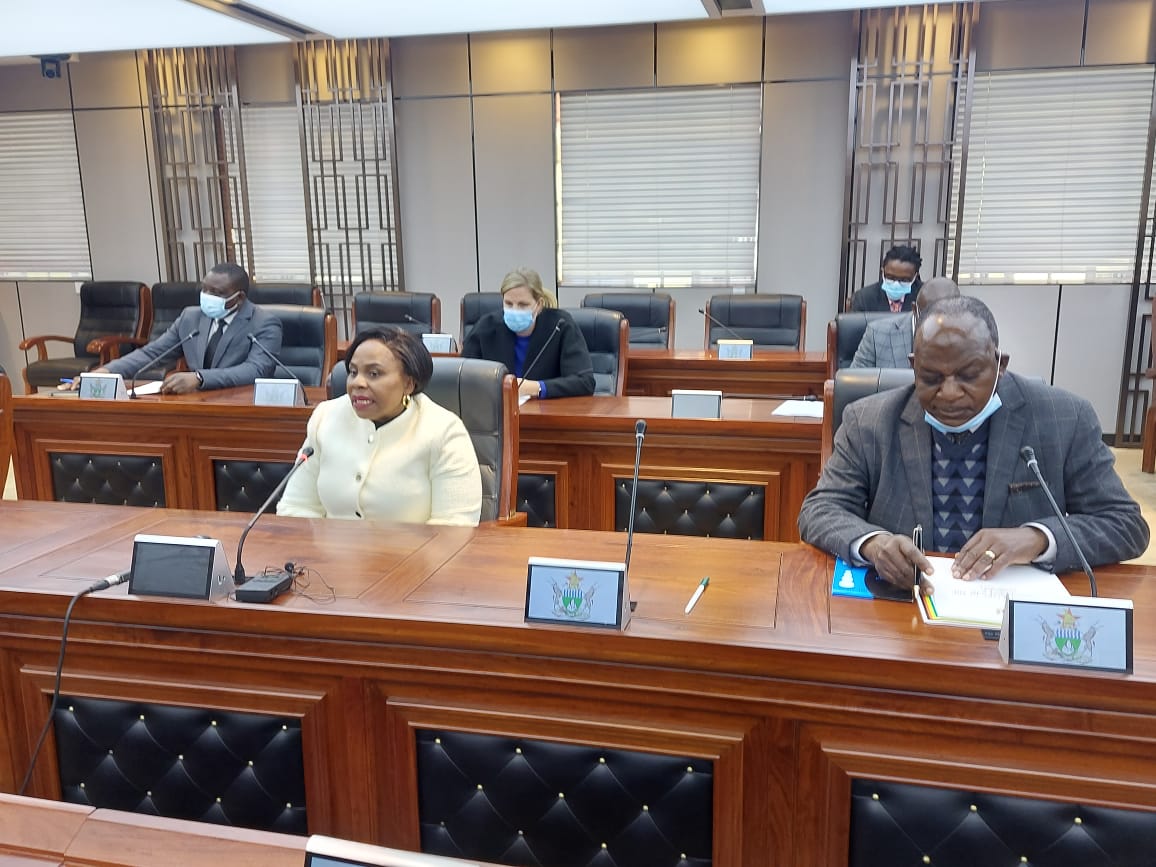 Cabinet takes this opportunity to clarify that the relaxation which was recently allowed in the COVID-19 regulations pertaining to business hours of operation for bars and restaurants also applies to casinos, namely:

ZIMBABWE’S RESPONSE TO THE COVID-19 PANDEMIC, AND REPORT ON THE PROCUREMENT AND ROLLOUT OF VACCINES

Cabinet received an update on the Country‘s Response to the Covid-19 Pandemic and a Report on the Procurement and Roll-Out of Vaccines,  which was presented by the Minister of Higher and Tertiary Education, Innovation, Science and Technology Development, Honourable Professor Amon Murwira, as the Acting Minister of Health and Child Care.

The overall number of new COVID-19 cases continued to decrease, with 383 cases having been recorded during the week, compared to the 552 recorded the previous week, marking a 38% decline.

An average of 55 new cases was recorded per day, compared to 79 new cases the previous week. This trend of declining cases confirms that the pandemic remains under control. The public must, however, continue to adhere to public health and social COVID-19 prevention measures, which have largely contributed to the pandemic being under control.

Regarding the national vaccination programme, Cabinet wishes to inform the nation that, as at 4 July 2022, a total of 6 313 389 first doses of the COVID-19 vaccine had been administered, while 4 661 854 people had received their second dose, and 893 978 their third dose.

This translates to a national coverage of 56.1%, compared to the 55.9% recorded the previous week. Given the large gap between the 1st and 2nd doses administered, those who have taken their first dose should go for their 2nd dose.

In addition, more resources will be availed for provincial teams to step up their vaccination outreach programmes which focus on increasing uptake of the 2nd dose.

On the related matter of monkeypox, Cabinet would like to highlight that, currently, there are no cases of this disease in Zimbabwe.

The World Health Organisation (WHO) International Health Regulations Emergency Committee has also advised that the outbreak does not at this stage constitute a Public Health Emergency of International Concern.

Given that the measures which control COVID-19 have also been found to be effective in curtailing the spread of monkeypox, Zimbabwe should remain vigilant for both COVID-19 and mokeypox by:

Cabinet takes this opportunity to clarify that the relaxation which was recently allowed in the COVID-19 regulations pertaining to business hours of operation for bars and restaurants also applies to casinos, namely:

Cabinet received a report on priority projects for the 2nd 100-Day Cycle of 2022, as presented by the Minister of State for Presidential Affairs and Monitoring Implementation of Government Programmes, Honourable Dr. Joram Gumbo.

The nation is informed that the 2nd 100-Day Cycle of 2022 commenced on 23 May 2022 and is scheduled to end on 30 August 2022. A total of 165 projects were tabled for implementation by the 21 Ministries, Departments and Agencies. The projects include power and energy development, dam construction, irrigation development, provision of school infrastructure, borehole drilling, road construction and provision of housing and social amenities. The Infrastructure and Utilities pillar constitutes the highest number of projects. These projects contribute to the National Development Strategy 1 (NDS 1), and are aligned to the Whole of Government Performance Management Programme.

The distribution of projects according to Province is as follows:

Some of the projects are replicated in more than one province and are expected to positively contribute to Government’s aspirations of providing quality service and improving the livelihoods of the citizens.

For the purposes of expanding Buffalo Range Airport in Masvingo Province Cabinet resolved that all the farmers settled on the critical zones of the  airport should be relocated.  The relocation will also enhance aviation security standards.  The report was  presented by the Minister of Transport and Infrastructural Development, Honourable Felix Mhona.

Cabinet noted that the continued farming operations in the airport’s critical zones have resulted in a sharp increase in human, domestic and wild animal incursions on the airfield. The cropping activities have attracted bird activity to the aerodrome environs, whilst the rampant cutting down of trees, veldt fires and quarry mining activities on the western side of the airport has led to serious land degradation.

4.0   INCREASED DEMAND FOR ELECTRICITY DUE TO INCREASED ECONOMIC ACTIVITY

Cabinet considered and noted Proposals on Managing the Increased Demand for Electricity occasioned by increasing activity in the economy, as presented by the Minister of Energy and Power Development, Honourable Zhemu Soda.

Cabinet notes, with pleasure, that increased economic activity, especially in the agricultural and mining sectors as well as the manufacturing sector, has increased the demand for electricity. Furthermore, ongoing massive housing and other infrastructural development projects has increased the consumption of electricity. This calls for efficiency in the production, distribution and use of electrical power.

The stepped application of the electricity tariff whereby users who consume above a certain threshold are charged at a higher rate is already in application in order to deter inefficient use of national grid electricity. The Renewable Energy Policy also stipulates the enhanced use of solar and renewable energy sources by consumers. For instance, new housing units being constructed are required to install solar geysers. The net-metering system is also being implemented. Domestic consumers with solar panels on their rooftops which are connected to the national grid, can sell any excess power that they generate to the national grid. In general, the use of off-grid electrical power through the use of solar energy allows consumers a significant measure of control over their electricity energy costs. Accordingly, the whole production, supply, distribution and retailing framework of electrical power is being reviewed to take into account these positive developments in the economy.

Cabinet received and noted, with satisfaction, a report on the country’s good showing in the Global Open Budget Survey, as presented by the Minister of Finance and Economic Development, Honourable Professor Mthuli Ncube.

Cabinet announces, with immense pleasure that Zimbabwe has improved by 11 positions from a ranking of 52nd to 41st out of 120 countries on the latest Global Open Budget Survey. The Survey measures the overall quality of the National Budget process, as well as the transparency and quality of consultations of the process. In terms of the quality of the Budget, Zimbabwe ranks 14 points above the world average and well above all African countries.

Cabinet wishes to highlight that within Africa, Zimbabwe is now ranked 3rd after South Africa and Benin, which occupy the 1st and 2nd positions, respectively. In the southern African region, Zimbabwe is now number two, behind South Africa. The significant improvement in the Global Open Budget Survey is testimony of the success being achieved in the country’s economic reforms under the Second Republic.  Government joins the People of Zimbabwe in celebrating this milestone.

Cabinet received a report on the Zimbabwean Achievements in the Sporting and Non-sporting Arena, as reported by the Minister of Youth, Sport, Arts and Recreation, Honourable Dr. Kirsty Coventry.

The nation is informed that the Zimbabwean Moot Team competed in the 2022 Euro Moot Court Competition finals against Netherlands and came first. Cabinet is proud of this achievement and joins the nation in congratulating our students for raising the Zimbabwean flag high and putting Zimbabwe on the world map.

The nation is also informed that two Zimbabwean tennis umpires, Fridlanger Kadzombe and Kossam Mhangami, are officiating at the 2022 edition of the Wimbledon Championships being held in London. The 135th Wimbledon Championship, which began on 27th June 2022 will end on 10th July 2022.  This is the first time in history that two Zimbabwean official have officiated at this prestigious event.

Cabinet further noted progress being made by the Zimbabwe Rugby Team (Sables), which beat Ivory Coast at the ongoing African Championships and is vying for a 2023 World Cup qualification.  If Zimbabwe wins this tournament the country will automatically qualify for the 2023 World Rugby Championships.

8.0  ELECTION OF CHIEF CHARUMBIRA TO THE PAN-AFRICAN PARLIAMENT PRESIDENCY