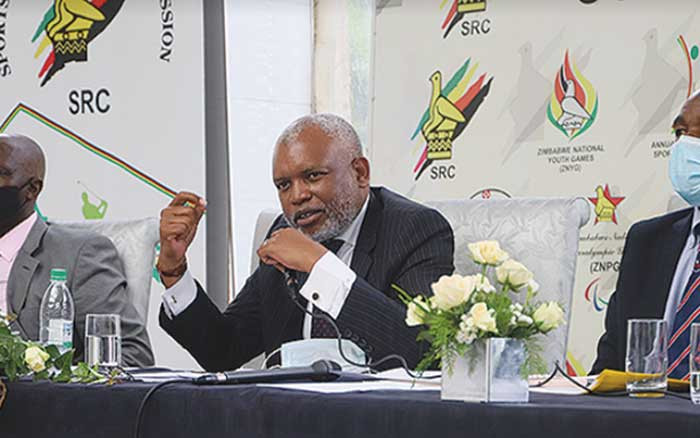 MEMBERS of Parliament have launched a fresh bid to pave for the lifting of the country’s suspension by Fifa after imploring Sports minister Kirsty Coventry to ensure the Gerald Mlotshwa-led Sports and Recreation Commission (SRC) reinstates the suspended Zifa board led by Felton Kamambo by October 31.

In a document titled the The State of football administration in Zimbabwe, which was presented to Parliament, the Portfolio Committee on Youth, Sport, Arts and Recreation appeared to give the SRC an ultimatum to reinstate the Kamambo board.

The parliamentary committee is chaired by Chivi North MP Mathias Tongofa and some of its notable members include acting Zifa president Gift Banda and ex-Zifa vice-president Omega Sibanda. “The committee expressed its concern on (the) overwhelming public outcry following the ban imposed on Zimbabwe by Fifa.

“It is, indeed, in the interest of the public at large and the soccer governing board in particular, to get the country back on the international scene in the world of football. As observed by Fifa, government interference in football matters has far-reaching implications that can undermine the country’s ability to enjoy the potential benefits that can accrue from participating at international fora.

“As such, there is need to observe and respect both the national and international statues, rules and regulations governing football administration,” part of the report read.

“Therefore, the committee implores the SRC to reverse its decision and implement recommendations by Fifa so as to allow the country to participate in international football competitions.”

The parliamentary committee called on Coventry to ensure that the SRC reinstates the suspended Zifa board by October 31.

“The committee made the following observations: 6.1 by October 31, 2022 the Youth, Sport, Arts and Recreation ministry should ensure that SRC board has repealed its decision of;

(a) November 26, 2020 which suspended the Zifa general secretary;

(c) December 17, 2021 which established the Zifa restructuring committee; in order to pave way for the lifting of the ban imposed by Fifa on Zimbabwe from participating in international football competitions,” part of the report in possession of NewsDay read.

The parliamentary committee also called for amendments to section 34 of the SRC Act [Chapter 25:15].

Zimbabwe was suspended from international football by Fifa on February 24 due to government interference in the running of the game.

This was after the SRC suspended the Zifa board in November last year over alleged failure to account for public funds, sexual harassment issues as well as gross incompetence among other issues.

While the SRC board has not responded to the report, an official at the sports regulatory body said it would only be guided by the findings of the forensic audit into Zifa’s financial affairs which is set to be released soon.

“The report is obviously authored by Omega Sibanda, with very little input or even knowledge of the other committee members. It is riddled with embarrassing errors,” the official, who requested anonymity, said.

“The recommendations violate both international and domestic law norms, and display an alarming ignorance of the governance shortcomings within Zifa; luckily Fifa has acknowledged these shortcomings by banning a senior Zifa official for sexual harassment of female referees.

“The committee’s recommendations implicitly condone sexual harassment and other corrupt practices within the running of football and tread upon the statutory mandate and independence of the SRC. Fifa acknowledges the problems within Zifa as does the Executive arm of government and the judicial arm of the State.

“The SRC is likely to completely ignore the committee’s report and be guided by the findings of the restructuring committee, the BDO forensic audit report as well as, ultimately, the Zifa congress whose authority over football issues the committee doesn’t appear to understand or appreciate, deliberately or otherwise.”