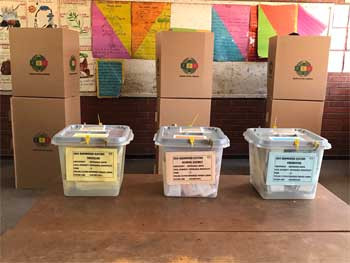 TWO traditional leaders in Buhera, Manicaland province, are openly campaigning for an aspiring Zanu PF candidate ahead of the 2023 elections.

Chiefs Chitsunge and Chimombe have openly backed Philip Guyo, who is reportedly eyeing the Buhera North seat in the 2023 elections.

The seat is currently held by Zanu PF’s William Mutomba.

Guyo, who lost to MDC Alliance in Chitungwiza before finding a home in Buhera, said traditional leaders were supporting him because he was the son of the area.

“Yes, I have the support of the traditional leaders. I am their son and they identify with my vision and philosophy. There is nothing sinister about their support,” he said when contacted for comment.

Chief Chitsunge said Guyo had brought development to the area.

“As a chief, I want to see the lives of my people being improved and Guyo has been working tirelessly to develop our area. He is our son and we are embracing him,” Chitsunge said.

But election watchdogs have raised concern over traditional leaders dabbling in partisan politics and coercing their subjects to vote for the ruling Zanu PF party.

The Constitution prohibits traditional leaders from being members of any political party or to participate in partisan politics.

According to a latest report by Election Resource Centre on its Election Credibility Indicator, traditional leaders continue to dabble in politics.

“The electoral environment has seen a worsening of the conduct of traditional leaders, chiefs and headmen actively mobilising citizens to vote on election day in rural areas potentially impacting the secrecy and integrity of the vote,” the report reads.

In an unrelated incident, Zanu PF Manicaland chairperson Mike Madiro is being accused of reportedly demanding cash from miners in the province as protection fees.

Sources in the province yesterday said Madiro, who is also Transport deputy minister, was desperately looking for money to sustain his campaigns ahead of Zanu PF’s central committee elections.

Madiro is expected to contest in the Zanu PF central committee elections in Zimunya-Marange district.

“Madiro’s driver Wilson Nyamande stormed our Chikwasi mine near Mutare River. The driver claimed to have been sent by his boss and demanded US$3 000 or else they will force them out of the mine,” a source told NewsDay Weekender.

Madiro, however, rubbished the allegations when contacted for comment.

“This is nonsense, where are you getting all this,” he fumed. “Remember this is election time, people are doing everything possible to tarnish each other’s names. I have come a long way in this party. I have always been clean; people should use other means to tarnish me than what they are doing.”