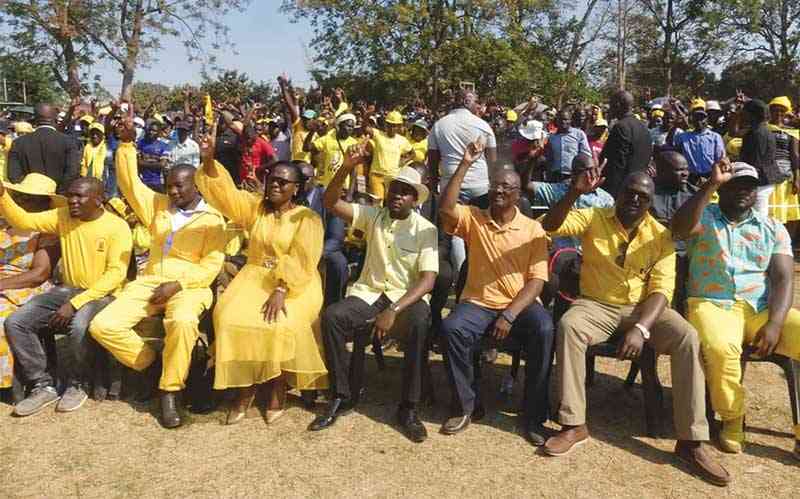 A HAND grenade exploded yesterday close to the venue where Citizens Coalition for Change (CCC) leader Nelson Chamisa was scheduled to address a rally in what the opposition party said was an intimidation tactic by suspected State agents and Zanu PF activists.

The grenade was thrown some metres away from Gadzema Stadium in Chinhoyi from a moving Honda Fit vehicle minutes before Chamisa arrived at the venue.

CCC interim organising secretary Amos Chibaya, who was on the podium when the grenade exploded, appealed to the crowd to remain calm.

“Don’t run away. Be calm, this is the work of Zanu PF. They want to scare you away, be vigilant, everything is under control,” Chibaya pleaded with the crowd.

A CCC security officer, Thomas Runyanga, said one of the occupants of the vehicle threw something wrapped in a paper before it exploded.

“I saw a silver Honda Fit passing by and someone from inside threw something wrapped in a plastic paper and when it hit the ground, I saw some smoke before it exploded,” he said.

CCC interim deputy spokesperson Gift Siziba said the opposition party had the registration number of the said vehicle, adding they would be filing a police report.

“We are going to be engaging the police particularly that we have got the number plate of the perpetrator’s vehicle so that this issue of State-sponsored violence is resolved,” Siziba told NewsDay yesterday evening.

“It is clear that as we enter into the shadows of the next election with CCC support surging and Chamisa being the candidate of choice, Zanu PF has embarked on violence to scare our people.

“The intention is to deter citizens from fighting for change, but we are happy that the citizens have defied the odds, and remain vigilant and fortified in the quest for change.”

Police spokesperson Assistant Commissioner Paul Nyathi was not answering his mobile phone when reached for comment.

The explosion at the rally comes as political tensions are rising in the country ahead of the 2023 elections.

CCC rallies have been disrupted by the police or suspected Zanu PF supporters.

An opposition supporter, Mboneni Ncube, was speared to death during an opposition rally which was addressed by Chamisa in Kwekwe ahead of the March by-elections.

Chamisa himself was attacked several times while touring the countryside last year, leading to analysts and the opposition predicting a violent run-up to the 2023 elections.

Away from the grenade incident, Chamisa launched fresh calls on the United Nations to supervise the elections and urged his supporters to register to vote in their numbers.

Chamisa blasted President Emmerson Mnangagwa’s Zanu PF for abusing war veterans, by absorbing them as an extension of the party.

War veterans, long viewed as a vital part of Zanu PF election campaigns, are now a formal wing of the ruling party.

“Mnangagwa is now busy manipulating our war veterans. War vets don’t belong to a particular party, they belong to the country,” Chamisa said

War veterans held a conference last Thursday and Friday, and endorsed Mnangagwa as the Zanu PF presidential candidate for the 2023 elections.

Chamisa said he was unfazed by the formation of parties with similar acronyms to his.

Another party, Citizens Convergence for Change, was formed shortly before Chamisa unveiled his CCC.

“We do not care even if they bring 100 more CCC parties. We have a plan. There will be no confusion in the ballot. Our candidates will be identified with their pictures,” Chamisa said.

“They will employ various strategies to bring us down and confuse us, but we will not succumb to all those strategies.”

On party structures, Chamisa insisted that no one had a position in the party.

Senior party officials had retained positions they held in the MDC Alliance before the formation of the CCC in January early this year.

“We are a different party altogether from that other party, the MDC. The MDC position will not be recognised in CCC. We are a new party altogether. No one has a post,” Chamisa said.

“The citizens will choose their leaders. I see some saying: ‘I held this post in the MDC’. No! Leaders have to be appointed because we say citizens should be at the centre. It’s an ideological dispossession.”

The CCC is yet to hold an elective congress, with Chamisa and other leaders operating on an interim basis.

The party has no constitution or structures, including a policy blueprint.