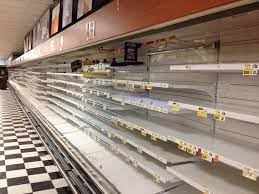 The Consumer Council of Zimbabwe (CCZ) yesterday said a family of five now required $120 000 a month to survive, up from $98 000 in April as the local currency tumbles and prices of basics and services skyrocket.

BY MIRIAM MANGWAYA/PROBLEM MASAU SOME basic commodities such as cooking oil have virtually disappeared from shop shelves as the monthly food basket shot to $120 000.

The Consumer Council of Zimbabwe (CCZ) yesterday said a family of five now required $120 000 a month to survive, up from $98 000 in April as the local currency tumbles and prices of basics and services skyrocket.

“The monthly bread basket for a family of six now stands at $120 834. The rise in the prices has been influenced by speculation where consumers created shortages as they hoarded commodities following the announcement of the bank lending ban by President Emmerson Mnangagwa,” CCZ spokesperson Christopher Kamba said.

“This created artificial shortages and when the demand is high, the price will always go up. The economic measure put in place by the government to allow citizens to import goods and services will not necessarily see the price of the family basket going down, but it will stabilise the prices of basic commodities,” Kamba added.

Government has put in place measures aimed at stabilising the economy, including allowing ordinary citizens to import basic commodities.

The OEAZ is a grouping of seven producers who supply 95% of the country’s edible oils.

“The shortages have been exacerbated by shortage of crude oil on the international market. The other thing is that the farmers are still harvesting their grains, so there is also a shortage of inputs,” Moyo said.

“However, the main reason is shortage of foreign currency. We have been saying the auction system is not working.”

Confederation of Retailers Association of Zimbabwe president Denford Mutashu said: “There is a general global shortage of cooking oil arising from the geopolitical impact of the Russia-Ukraine war as supply chains have been disrupted. We ought to invest locally and reduce the dependency.”

The shortages of basics evoke bad memories of 2008 when shop shelves were empty when the country was hit by record breaking hyperinflation of 500 billion percent.

Inflation is currently racing away and is at 94% as of last month.

The Zimbabwe dollar fell to $258 against the United States dollar on Tuesday from the $173 at the Reserve Bank of Zimbabwe-controlled auction system.

The local currency is, however, trading at over $420 at the parallel market.

“Our industries are not producing enough and we are relying on imported goods. When imported goods find a weak currency the prices have a tendency of going up,” Ncube said.

“The only solution is to address the currency system. It appears the government is having a challenge to strengthen the purchasing power of the Zimbabwe dollar, therefore, it must consider replacing the currency with a stronger one and scrap all the multiple exchange rates.”